Does wearing orange effect you hunt? Ever since wearing red or blaze orange became law in 1986, and later mandatory blaze orange in 1994, hunters have questioned if their game could see it or if it has a negative impact on the hunt; however, Whitetail and humans see colors differently and we use this fact to keep hunters protected from each other while also keeping them concealed in the woods.

In short, no whitetail deer cannot see the color orange. Research tells us that a whitetail’s eye is constructed in a different manner than a humans. Because of this, they see longer wavelengths of light differently. Instead of reds and oranges whitetails see browns and greys. So, wearing orange in the woods is perfectly fine and you are still reasonably invisible to whitetail as long as you can control your movement. Although, shorter wavelengths of light, like blues, are enhanced and better seen by whitetails than humans.

Differences in eyesight between Whitetail and Humans

The obvious difference between human and whitetail vision is the positioning of our eyes. Human eyes are positioned so that we can look directly forward with a field of view of about 180 degrees. This gives us a large overlap between our two eyes which contributes to detailed depth perception and the ability to focus our eyesight in one area. Whitetails, however, have their eyes positioned, like other prey animals, more on the sides of their heads.

Having their eyes positioned on the side gravely increases their field of view to around 300 degrees. It is also the construction of the eye itself that separates human and whitetail vision. They have a larger cornea, which is the outside of the eye, this also aids their field of view and lets in more light. This gives whitetail the advantage of being able to see threats nearly all around them during all times of the day but reduces their ability to focus on one area in detail.

Photoreceptor cells are what allow you to see light. They sense different wavelengths of light and send electrical impulses to your brain. You use these impulses to interpret reality with objects and colors. The two main types of photoreceptor cells are rods and cones. Cones are designed to function in bright light while rods are used for vision in low-light conditions. The differences between human and whitetail photoreceptors make us interpret light, and therefore color, in different ways.

“Deer can discriminate among wavelengths (i.e., perceive color), as demonstrated by operant conditioning methods in pen studies (Zacks and Budde 1983), as well as physiological studies of the retinal photoreceptors (Jacobs et al. 1994). Deer are dichromatic, meaning their vision is characterized by two cone types with different spectral sensitivities (Jacobs et al. 1994). In contrast, humans have trichromatic color vision. The range of colors dichromats perceive is much more limited since they rely on two spectral sensitivities instead of three like a trichromat (Carroll et al. 2001: Figure 1.1).”

Humans are trichromatic which means we can see all three primary colors: red, blue, and green. We can see all of these colors and the colors they make when they mix. Whitetail are dichromatic, so they only see two of the three primary colors along with their mixes. Due to this whitetail see blues and greens but not reds. The human disorder Protanopia is the best way to describe a whiletails color vison.

If we were talking about a Human, this would be a case where they would have deformed or missing cones that are required to see longer wavelengths of light, like red. However, thanks to research we know that whitetails do not have these cones at all. As a result, people or animals that see in this way are unable to distinguish between colors in the green-yellow-red section of the spectrum. So, when you see red, deer see a brown color. When you see orange, deer see more of a grey color.

What About the Research?

So how do we know for a fact that whitetails are dichromatic? Elizabeth Ashley Miller (University of Georgia) under the direction of Dr. Karl V. Miller, and Dr. Robert J. Warren carried out a research project to test the visual aptitudes of white-tailed deer, Miller used a “deer-training-apparatus” (DTA). They used this apparatus to supply a stimulus to the whitetail and record the reaction to said stimuli.

Miller describes the DTA as,

“The DTAs present two stimuli over separate food troughs to a single deer (Figure 2). Deer select a stimulus by attempting to feed in the corresponding trough below. An infrared sensor in front of the trough detects an animal’s choice of a stimulus, and the decision is automatically recorded. The DTAs dispense the food reward and also limit access to feed when incorrect decisions are made. The positive stimuli were lights of varying wavelength and intensity. The wavelengths selected for study were based upon the findings of Jacobs et al. 6 (1997). Stimuli were presented for eight seconds after a bell rang. If the deer responded to the positive stimulus, the doors to the feed troughs stayed open for one minute, allowing the deer to feed. When the deer selected the trough that was not associated with the positive stimuli, the doors shut immediately. This research demonstrated that the DTA is an effective and efficient method by which to train white-tailed deer.

Miller used this device with seven does over the course of a month. She recorded the data over this time and was able to conclude that the DTA was an appropriate system to use for testing the senses of whitetail. The tests conducted proved that whitetails are dichromatic by observing the reactions from presenting different stimuli in the form of colored images on the LCD screens.

Why are Hunters Required to Wear Orange?

Hunting can be dangerous if not done correctly, after all in the ideal situation, something dies. It is best to make sure that that something is not you. That means taking the extra precaution and following the laws to keep yourself safe. In the United States of America during the year 1986, wearing blaze orange or red in the woods during gun season became a mandated law. Later in 1994, it was switched to only mandate blaze orange.

But why? Accidental shootings in the woods happen. Ever since this law, coupled with hunter safety courses, they have been on a steady decline. According to the IHEA-USA (International Hunters Education Association), the number of fatal accidental shootings has dwindled to under 100 cases per year. But low numbers do not mean that it is not important to wear your orange, especially if you are hunting public land.

The Best Way to Camouflage Yourself for Whitetail

So as we talked about, deer see in blues and greens. We can use this small amount of information to conceal ourselves to the best of our ability. You always need to wear green camouflage but stay away from blues. Before my research on this topic, I wore blue jeans underneath a thin pair of leaf pants. Well as it turns out, these are easily visible to deer so wear darker or green pants and wear your orange as well. Keeping your hands and face covered will also help, especially if you have a lighter complexion.

Another question I have seen is, “if whitetail cannot see the color orange, then why do we make orange camouflage?”. Well, this is for the same reason we make green camouflage, you do not just sit in your stand with a solid green shirt, you wear a camouflage that breaks up your silhouette. Movement will be the first thing to give you away, regardless of the camouflage you are wearing. Controlling your movement will lead to the most success, no matter what you wear.

Thanks for reading my article about whether whitetail deer can see orange. I hope you enjoyed it and learned something you didn’t already know. If you like my content, subscribe to my weekly update. If you have any other questions about whitetail color perception or just want to connect, feel free to email me at Patrick.Long@omegaoutdoors.net. 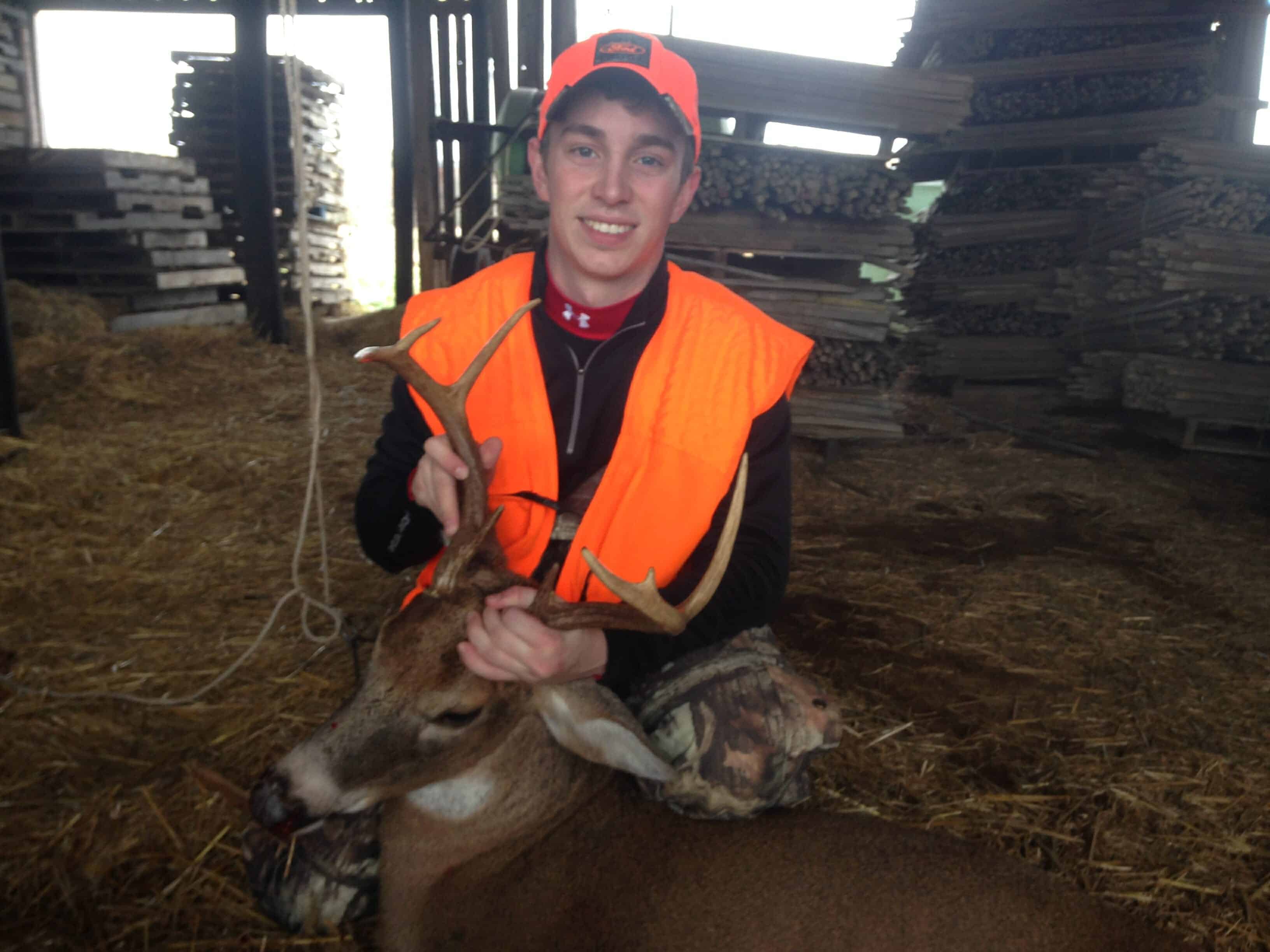